About a week ago someone posted on facebook asking for a comparison of Zoya Thandie and Sally Hansen Sun Kissed. It just so happens that I have both polishes in my collection so I quickly swatched them and posted a pic on their page. I soon realized that I haven't done a comparison post in a while and really should share my findings with all my lovely readers.

As you may have noticed I like to start these post out with a bottle shot. I'm sure most of you have had a polish look one color in the bottle and look different once it dried on the nail. 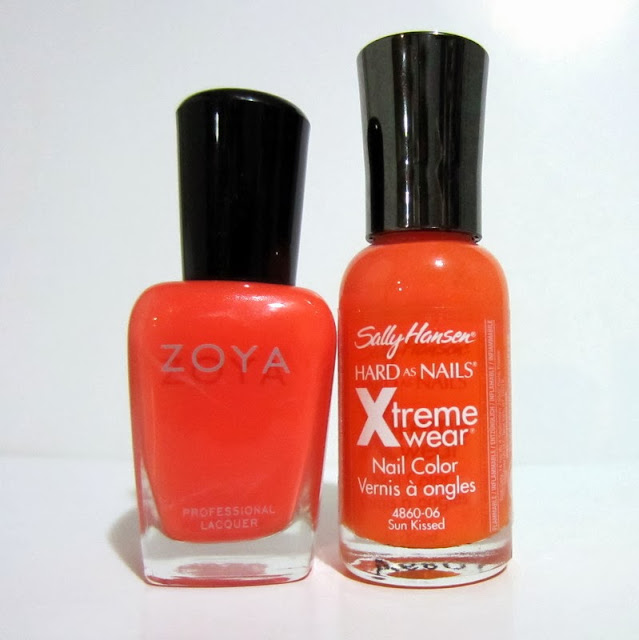 Just looking at these two in the bottle I thought that they were extremely similar. The slight difference being that Thandie has an almost pinkish undertone that becomes more obvious when placed next to Sun Kissed. The one time I wore Thandie I did notice a touch of coral to it. You can see Thandie on my nails here.

But how do the polishes compare when they are dry? Well, let's take a look... 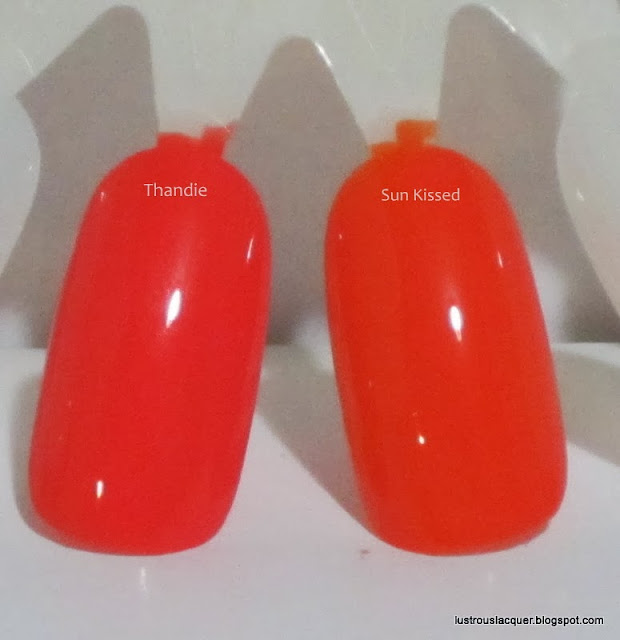 The coral influence in Thandie is very apparent on the nail wheel while Sun Kissed has more of a "true orange" look to it. In the end, these colors are not dupes. In fact, I might not go as far as to say they are similar either because of the different undertones.  Thandie being pinker and Sun Kissed being more yellow. (That might just be me though. My job, after all, is to look at paint samples all day and tell people what's different about them and why one would look better in their space vs the other.) I'm sure lots of people would consider these polishes similar. Do you need both in your collection? I'll leave that up to you to decide.

As far as application goes both polishes flowed off the brush nicely. Thandie was closer to full opacity in one coat but still had some slight streaking. Full opacity was reached after 2 coats for both polishes. And the final result was a smooth shiny finish all around. I don't really have a favorite out of these two, to be honest. I can see using Sun Kissed for a Halloween manicure and Thandie in a sunset gradient.

Am I crazy for not considering these polishes to be similar? Would you buy both to have in your collection?  Do you have any requests for comparison posts? If I have the colors I'm more than happy to put a post together. Thanks for reading my post. Id love to hear your thoughts on these two. Happy Polishing!
﻿
Zoya
By Lustrous Lacquer at 8:11 AM