Back in the beginning of March Absolut Lacquer had a contest to name her new collection of polish. My kids and I looked at the bottle shots and I let them each try and pick a name. It was a fun, and the first time my boys didn't roll their eyes at the mere mention of nail polish. Well wouldn't you know it,  one of the names was picked! Ladies and Gentlemen, I give you Confetti Intervention 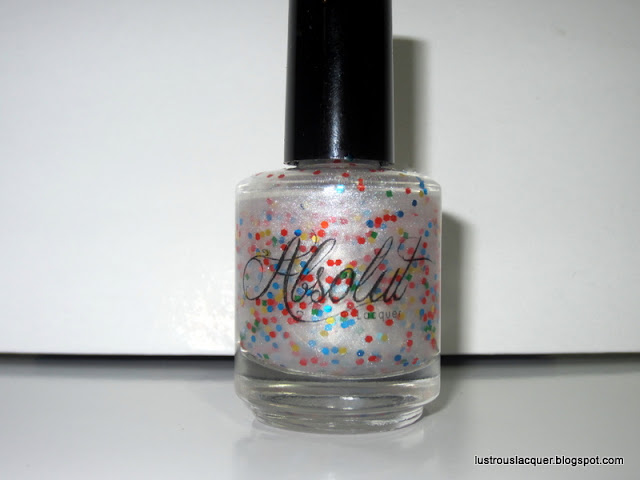 I don't remember which one of my 3 picked the name but if you ask them they will each tell you it was their idea. I, however, am the lucky one that gets the bottle of polish.

If you've followed my fb page for any length of time you will know that I haven't been a big fan of glitter polish. Don't get me wrong I love it on others. I just didn't like the thought of the texture on my nails or the pain of removing it. This year for 2013 I vowed to change that. You might be asking yourself... Why am I telling you this? Well, I have a feeling that my lack of experience with glitter polish may have played a roll in the slight problems I had with the application of this polish at first.

Before I get into all of that though, let me show you what this gorgeous polish looks like on. 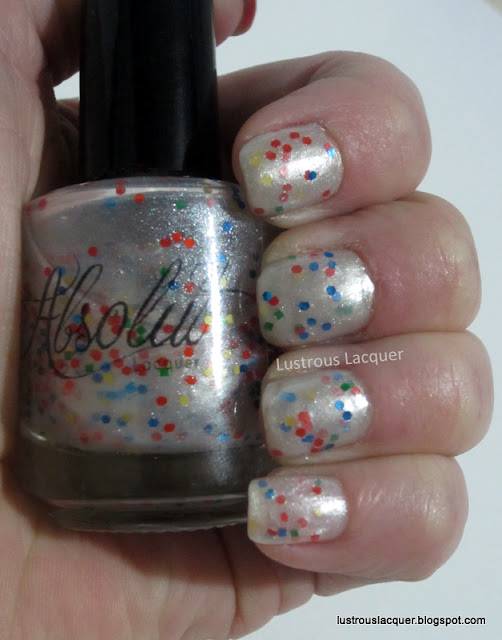 Here I have 3 coats on my pinkie finger alone and 3 coats over an unnamed silver polish on the other fingers. You can see a slight pink undertone on the pinkie that I thought was my natural nail showing through but I was wrong. In natural light, the pink showed up on the other nails too.

Now for the application. I found that when I applied the polish like I normally do the glitters wanted to slide up to the tip of my fingernail, leaving the base of the nail bare. I decided to let each layer dry completely between application and that fixed the glitter slipping issue. I still had to do some slight playing around to get the placement that I wanted but that ended up being minimal. The dry time was actually really quick and I ended up only having to wait about a minute or two between finishing both hands and then starting over again. And the wear time was phenomenal. I wore this for one full week without a single chip and very minimal tip wear. 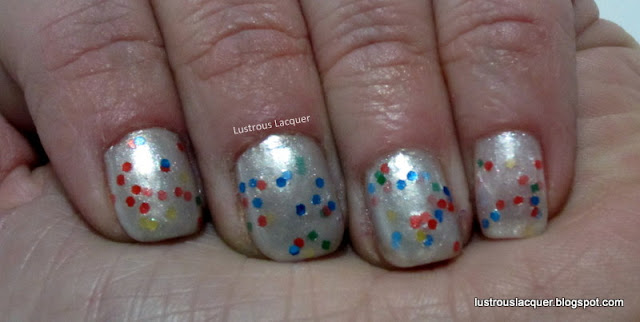 This picture was taken 5 days after application!

If you'd like to pick up a bottle for yourself they can be purchased at AbsolutLacquer.etsy.com. To see the latest polishes offered check out Absolute Lacquer on FB at www.Facebook.com/AbsolutLacquer
﻿

I've been in love with the fishtail braid manicure since the first time I saw one. It's such an intricate design how can you not love it?!? So like with any nail art that I want to get just right I sat down and watched video after video on how to do this. After about 15 videos I felt prepared and set out doing my nails.

I knew I wanted to use China Glaze Peachy Keen as the base color. Lately, I've been drawn to orange colors for spring, especially the ones that lean toward tangerine. I'm not normally an Orange person so this is kind of fun and surprising for me. I also knew that I needed to use really opaque colors for the braid. This gave me a little trouble because I wanted to use yellow for a bright I'm ready for a spring look. I have maybe 6 yellows in my collection and most of them are pretty sheer. Eek! What should I do? I decided on using my striper polishes. I knew I would have an easier time making my lines with them than a regular polish brush anyway. 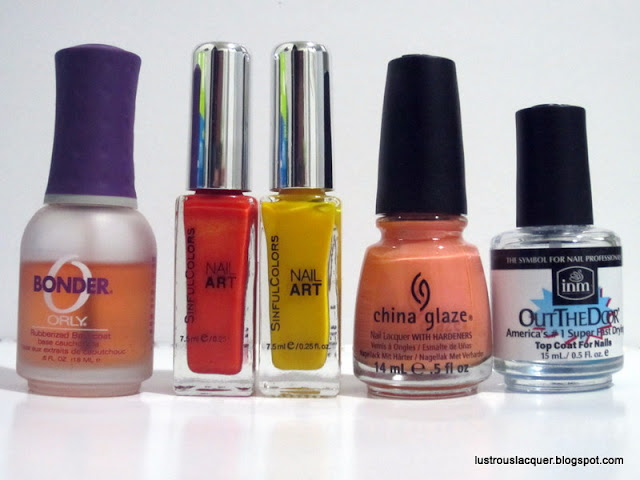 So here's what I came up with to try my mani. As always my trusty Orly Bonder base coat. Nail stripers from Sinful Colors in Sunset and Morning Breath (Ewww who came up with that name?) China Glaze Peachy Keen and Out The Door top coat. 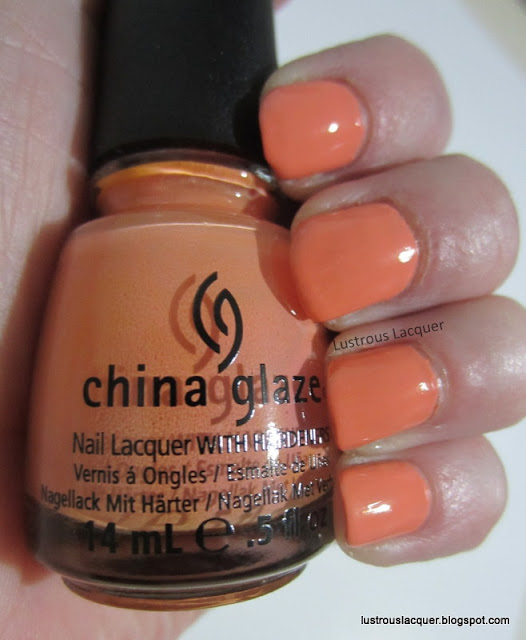 Here I have 2 coats of Peachy Keen plus top coat. I had some slight trouble with the application because the polish was a tad runny. I had to apply it in thin coats so the first one was a bit streaky. As you can see everything evened out nicely with the second coat and dried a hair darker than it is in the bottle.

The tutorial I decided to use can be found here. I went with this one knowing that my yellow was going to be an issue if I actually overlapped the other colors.

Now, normally I do my right hand first even though I'm right-handed. I figure I go slower with my left hand, I can get more confident with the strokes for when I do my left (and photographed) hand. Plus I'm less likely to smudge my right hand when it's wet. But this time I knew I was limited on the time I had to do the manicure and get it photographed so I did the entire thing on my left hand before any polish touched my right. I did learn a few things while doing my left hand but had a hard time applying them when I finally did the right. This is a harder manicure to do than I thought it would be! Its all about the angles. If one angle is off it throws the entire thing off.

Are you ready to see the finished results? 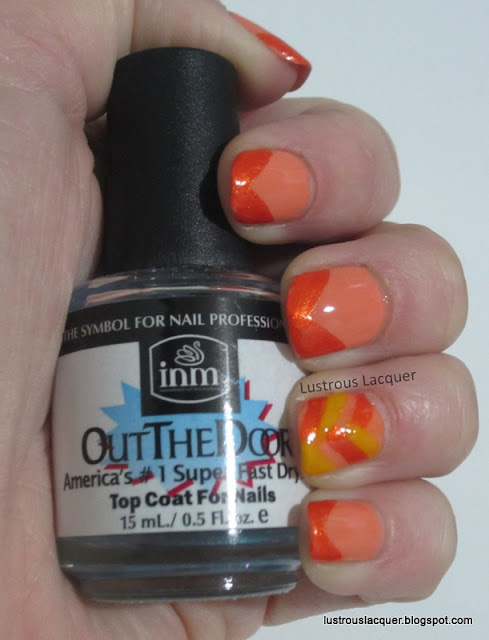 I'm actually kind of proud of how this turned out. Originally I was planning on doing every nail but I think that may have been a bit much. I did have to do 2 coats with the yellow to get it to stand out but using a striper made that easy. I'm still trying to decide if I want to add some of the yellow on the other nails, but I can always do that later I guess. Maybe add a strip of yellow under the orange tips to keep with the line theme or mix it up with tiny dots.

But now I have a question for you. I took quite a few pictures of this trying to get just the right shot. On one of them my flash went off , just one out of about 20 shots. I always thought I should avoid using those photos so I could get a more color accurate picture. I have a comparison of the photos for you and I'd love for you to tell me which one you like better and why. 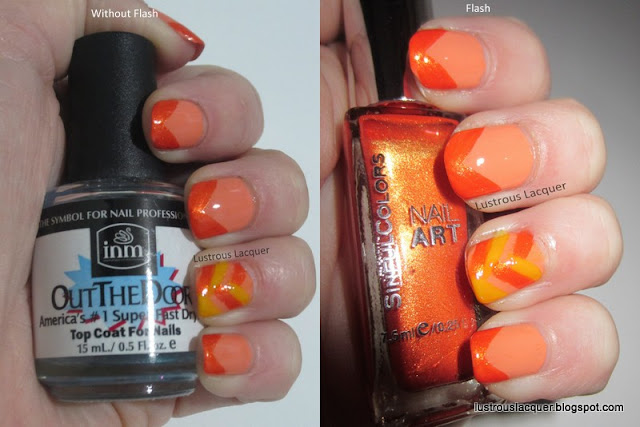