The Nails I wore to Polishcon Chicago

Well, Polishcon Chicago was a little over a month ago and I am just getting around to blogging about my nails now. I had a good and only ok time at Polishcon. I was so excited to go and see everyone, meet some makers that I have been supporting over the years and try to make some new connections. Sadly my optimistic attitude disappeared as soon as I walked in the door. I've never thought of myself as socially awkward but boy was I ever. I found myself unable to make random chitchat with people, I just didn't know what to say and have a feeling I came off as stuck-up instead of nervous. And I just couldn't find the right way to work in handing out my business cards. So if I saw you at the con and our exchange was painful please don't take it personally. It was all me feeling awkward and shy. I promise to work on it for the next convention. But you're not here to hear about my insecurities, you're here for the nails right. So let's get to it.

I went with a manicure inspired by Yagala that I fell in love with the very first time I saw them. She makes everything look so easy, doesn't she? I should know better than to try and recreate one of her looks though. Especially since I wanted to get them just right and my skill level is nowhere near hers. Well, 3 attempts and about 5 hours later this is what I ended up with. 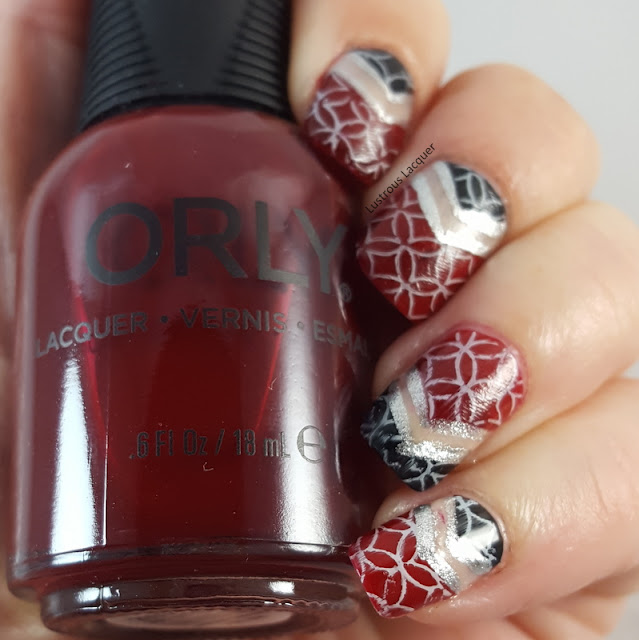 I started out with a base of China Glaze Heaven. This is my go-to polish when I want to create the illusion of bare nails for a negative space manicure.  As you polishaholics know it's not always possible to have nice looking naked nails and mine were looking particularly yellow that week.

To create my V's I used some tip guides that I picked up awhile back from Sally Beauty Supply. I liked the idea of an angled take on the half-moon mani with the accent nail looking more like a funky french. It's a subtle difference but still, creates the accent.  This step I had to repeat a few times because I was anxious and didn't allow enough time for my base color to dry. Boy what a mess that was! I actually had an issue with being anxious throughout this entire manicure and ended up getting sheet marks in it before I could photograph it. My advice to you: Make sure you have enough time for your manicure to dry completely before heading to bed. Especially if it's a look that's a bit on the complicated side for your skill level. 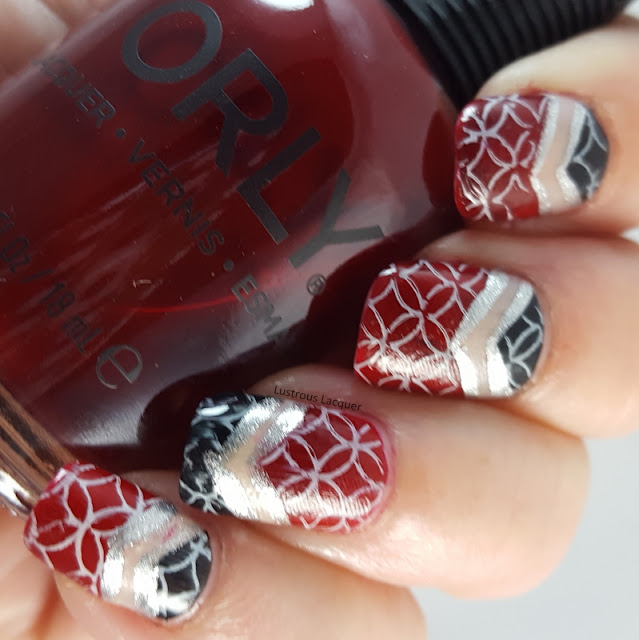 For my red and black, I used Zoya Black Swan and Orly Just Bitten. Just Bitten is from the Velvet Dreams collection Orly released for the fall of this year and I'll have a review up of that collection next week.

To avoid getting my stamped image onto the negative space part of my manicure I used liquid Latex to carefully cover the angle and around my cuticles. I wasn't taking any chances since I'd already had to redo the red and black portions a few times and was frustrated at this point. But I really wanted this mani to work so I gathered up all my patience and pushed through. 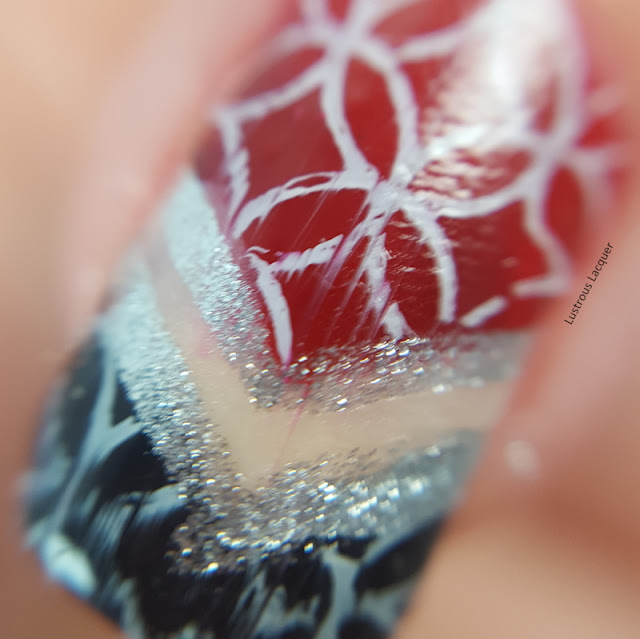 The image I used is from the Abstractos 04 plate by Z nail. You can order these through the MDU site. I've used this plate a few times and found it to be etched well and very easy to use.  In fact, I used this exact same plate to create some decals earlier this year. Plus you can't really beat the price point. Especially if you can get it on sale for $3.50 but the regular price of $5 is pretty good too.  The polish I used to stamp with is Hit the Bottle Snowed In. I finished the look by edging the angles with a silver striping polish from China Glaze and a generous layer of Girl on the Run from Pure Ice. I should mention that normally Snowed In doesn't smear quite as badly and that it was my impatience that caused it.

In the end, I had mixed feelings about this manicure, mainly because it didn;t turn out quite like I had pictured but also I was proud of myself for not giving up and going with something that was easy for me. I think the next time I try a look similar to this I'll go with a more pointed V shape. Hopefully, that will help make my nails look longer and thinner. Have you ever had a manicure give you as much trouble as this one gave me? Thanks for stopping by and Happy Polishing!