Polishcon Minneapolis is just 2 days away and the excitement in this house is building. Not only will I be attending but my daughter gets to be my plus one. As some of you know I attended the event last fall in Chicago and had a pretty good time. My daughter begged and pleaded to go along but sadly it wasn't in the cards for her. As a bonus for her, her birthday is 4 days away so Polishcon is sort of her early birthday present, plus she will be buying her very own bottle of indie polish. I have no idea what she will get for her first indie but I'm pretty sure it will have lots of sparkles and possibly the word unicorn in the name if that's an option. Another fun item for this event is the Minnesota Nice collab box from 4 local makers which I will be sharing with you today!

There is a saying I hear all the time called Minnesota Nice, I honestly have no idea what that really means, I've just heard it all my life and thought hey that's a nice thing to be known for. I do however know each and every reference made in this collab because they are all 100% Minnesotan. So let's get to it.

We know it as the Vikings war chant, the rally cry, the word that brings the fans together – skol! “Skol has been in our lexicon since the very beginning of the franchise in 1961,” says Erin Swartz, Director of Brand and Creative for the Minnesota Vikings. “It was really like a Cheers! Vikings! We’ve scored, we’re celebrating, we’re winning.” 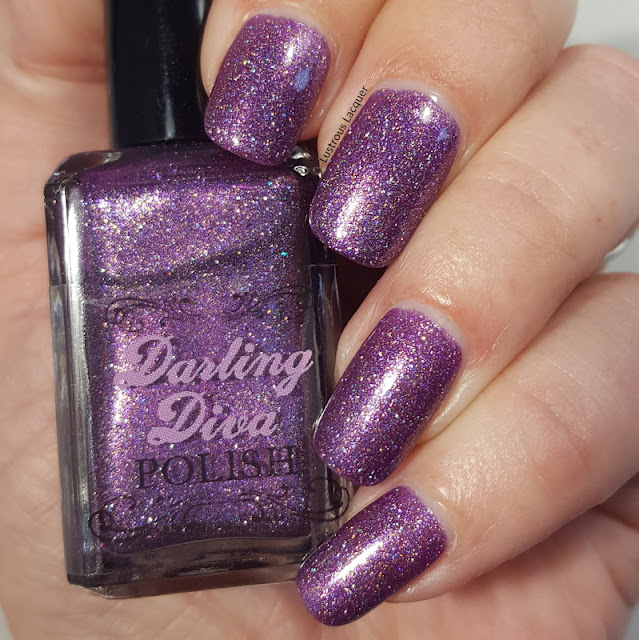 Skol! is the contribution from Darling Dive and is described as a purple tinted base with purple micro glitter, scattered holo glitter and, tiny iridescent shards. 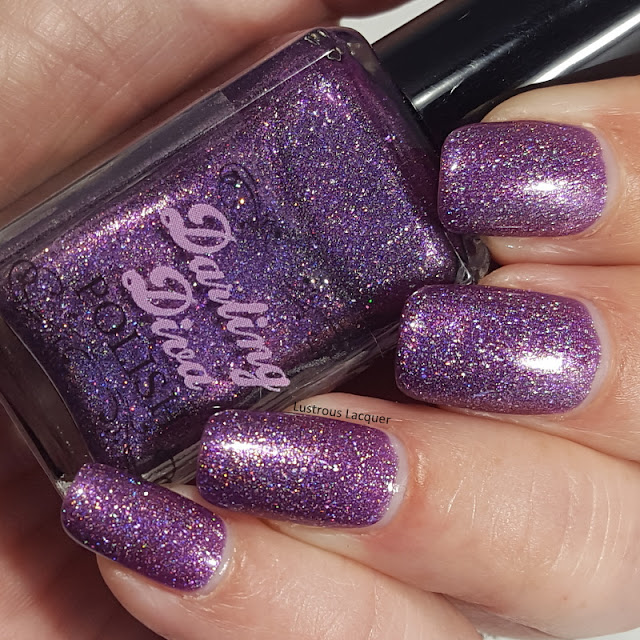 The formula has a nice smooth consistency which made application a breeze. There was a bit of VNL left after the first coat but full opacity can be achieved with a second coat. Shown here is two coats plus glossy top coat. 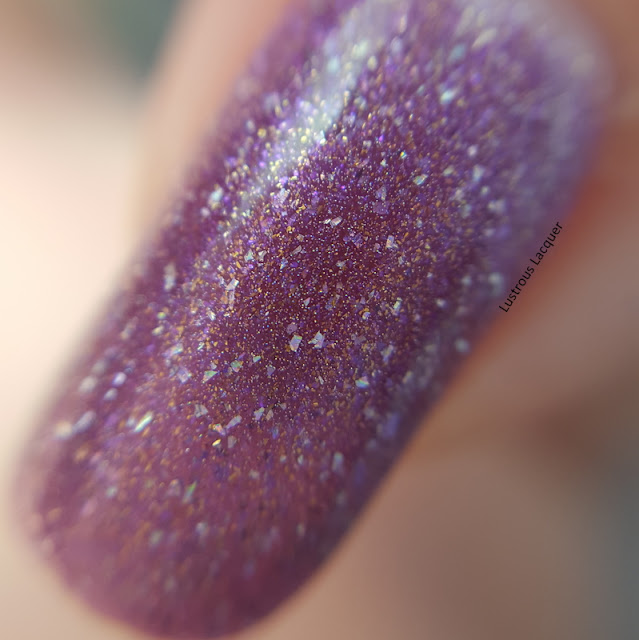 While I am not a Vikings fan myself (Go Packers) the Mr. is a die-hard fan so I get to watch the team quite frequently during the season. I have to say this polish is spot on for the inspiration and I will be wearing it again, probably on game day. (Just not when the Vikings play the Packers 😉)

A hotdish is a casserole which typically contains a starch, a meat, and a canned or frozen vegetable mixed with canned soup. The dish originates in the Upper Midwest region of the United States, where it remains popular, particularly in Minnesota, South Dakota, and North Dakota. Hotdish is cooked in a single baking dish and served hot (per its name). It commonly appears at communal gatherings such as family reunions, potlucks, and church suppers. 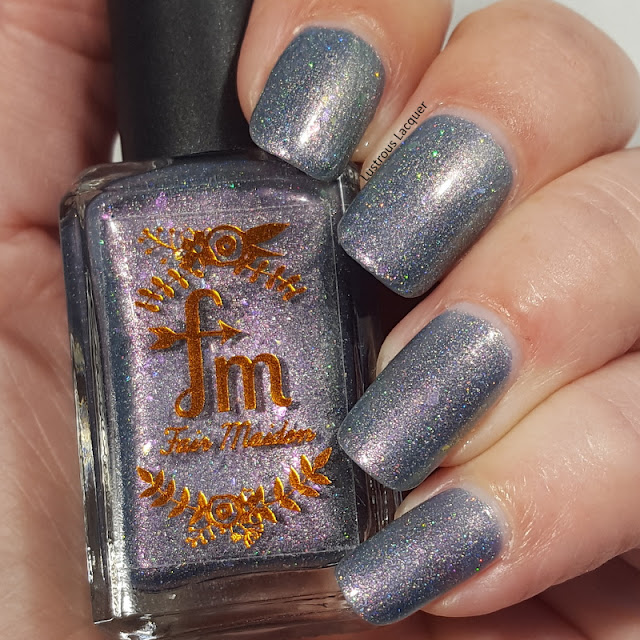 Hotdish is the contribution from Fair Maiden as is described as a mix of all that we love about polish - a blue/violet multi-chrome that shifts magenta-gold-green, holo sparkle and iridescent chameleon flakes in pink-blue-gold-green-violet. 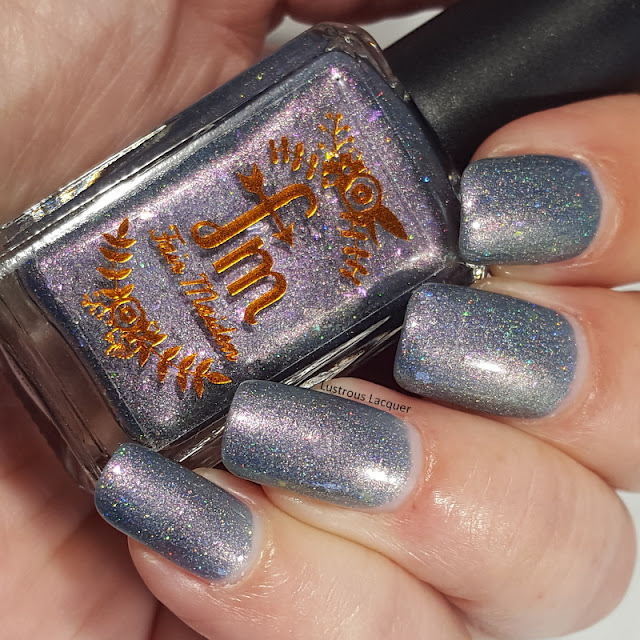 The formula for Hotdish is wonderful. The polish applies smoothly and evenly but is semi-sheer leaving a slight VNL after the first coat. Full opacity was reached after two and I've shown it here as two coats plus glossy top coat. 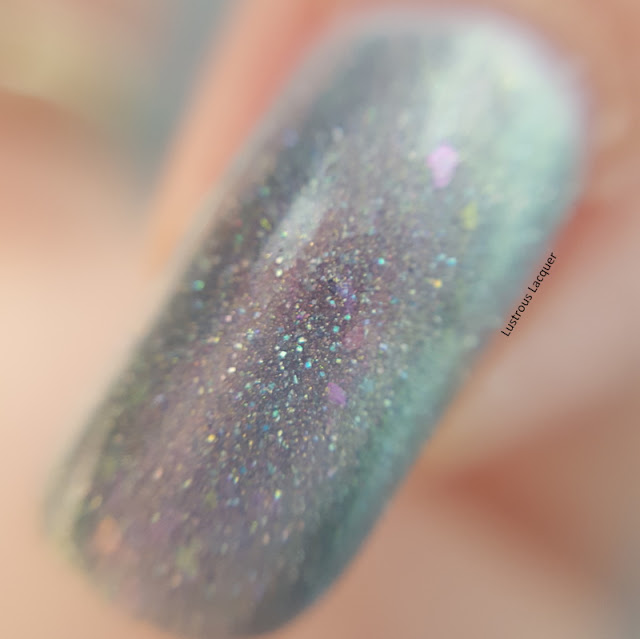 Small known fact, I have lived in Minnesota for 40 years and have never had hotdish. My mom never made it growing up and it's not something that shows up at get-togethers with my friends. The school I work at serves it monthly for lunch but I've never tried it. I do however love this polish as a transition color from summer to fall and think it would be great to wear in the winter time too. My only thing is I wish the flakes were a bit more visible. They seemed to get a bit lost but that may have been due to my application. I tend to apply my polish in a slightly thicker layer than most. I will be wearing this again and will use thinner coats to see if that changes things for me.

Minnesota is known on its license plates as the “Land of 10,000 Lakes,” but Minnesota actually has almost12,000 lakes. 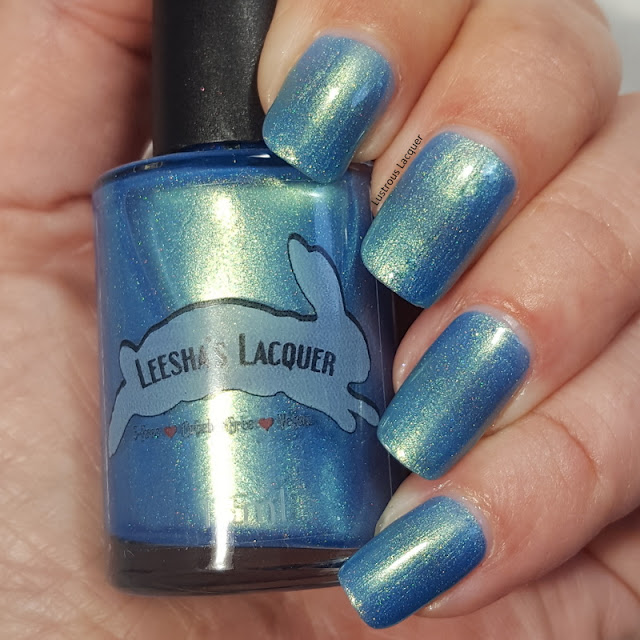 Land of 10,000 is Leesah's Lacquers contribution to the collab and is described as a turquoise lake blue with a strong gold shift and a smattering of holo, reminiscent of a sunset off of any of our 11,842 lakes. 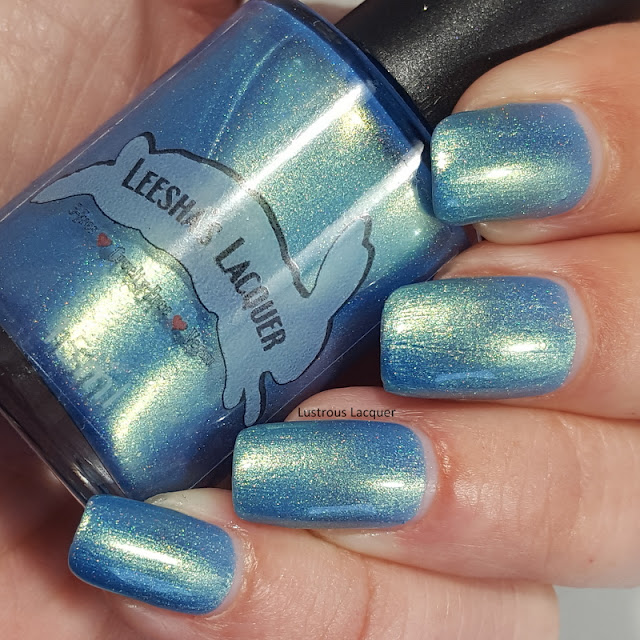 Land of 10,000 has a nice formula with smooth even coverage. It is the sheerest of the collab and I thought for sure after the first coat that I would need three coats for full opacity. I was pleasantly surprised when I achieved full opacity after only 2 coats. This polish has some serious building power. Shown here as two coats plus glossy top coat. 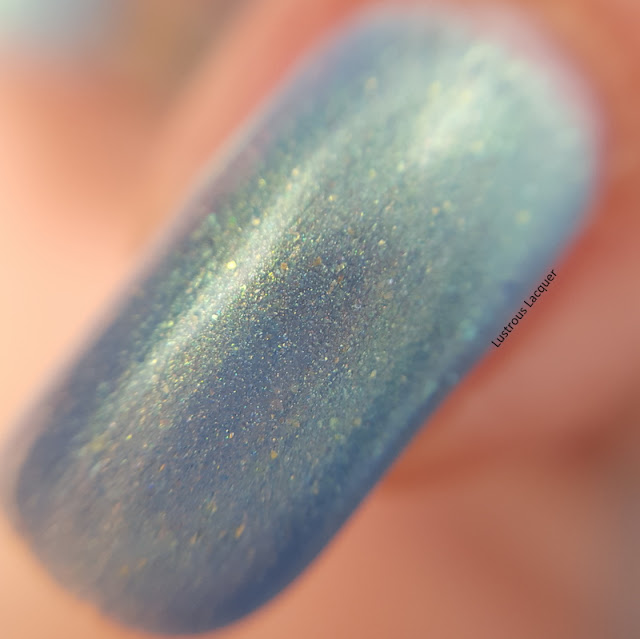 I really am reminded of days spent on the lake when I look at this polish.  I have seen the sun shimmering off the lakes in northern Minnesota and Leesha nailed it in this polish. This is another polish that will get lots of love from me. 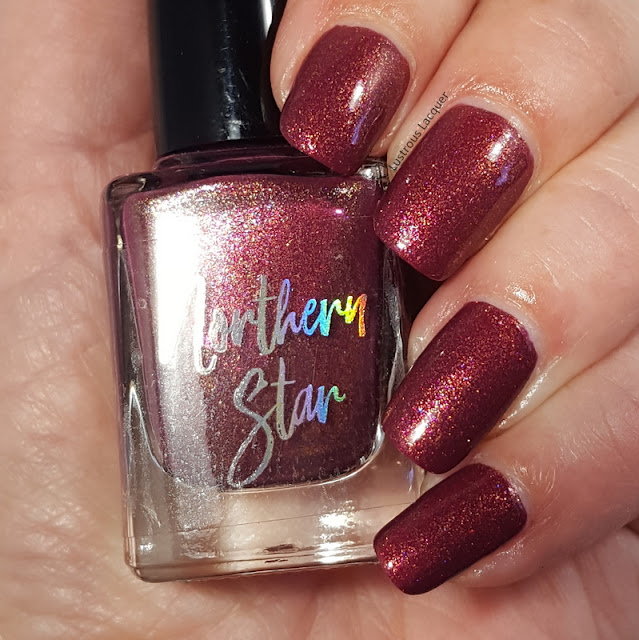 Uff Da is Northern Star's contribution to the collab and is described as a hibiscus red with gold shimmer, and pink to gold shifting micro flakes. 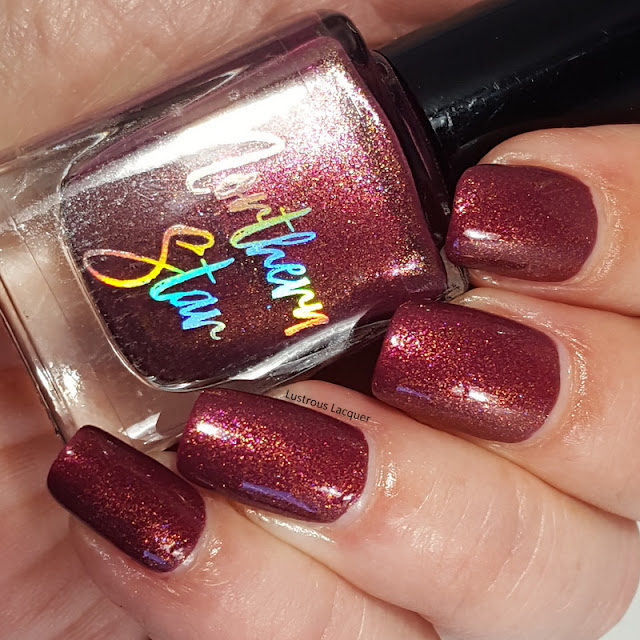 The formula for Uff Da is fantastic. The polish has a high opacity and I almost got away with only using one coat. The polish flows smoothly off the brush and evenly onto the nail. Shown here is two coats plus glossy top coat. 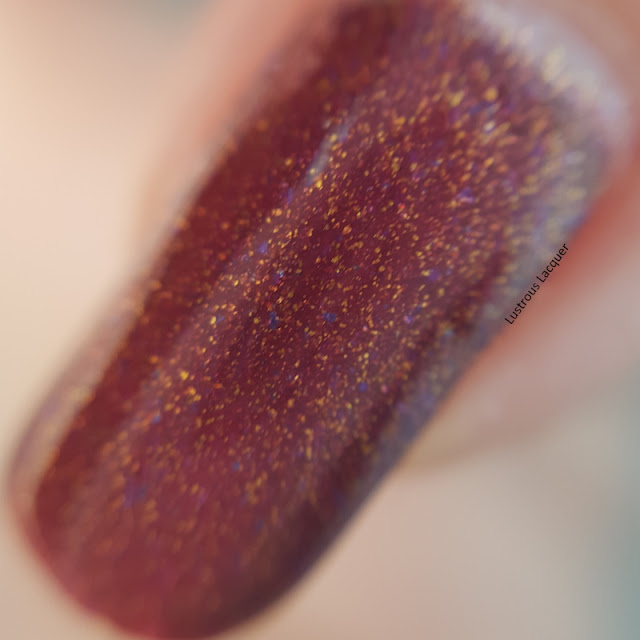 I have been known to say Uff Da but not as often as the movie, Fargo would lead you to believe. While I chose to show these polishes in alphabetical order it just worked out that I saved my favorite for last. I am so into fall colors right now it's insane and Uff Da falls perfectly into that category. Plus it will work great for the winter months as well.

This collab will be available at Polishcon (9/15)at the Darling Diva, Fair Maiden, and Leesha's Lacquers booths. Sadly Northern Star is not a vendor this year but I heard a rumor that she may be in attendance. The collab will be $32 for all 4 polishes plus a charm bracelet. As of right now, the polishes will not be available individually but I will keep you updated if that changes.

Which polish is your favorite? Are you attending Polishcon this Saturday or have you attended one in the past? Thanks for stopping by and Happy Polishing!
Polishcon
By Lustrous Lacquer at 6:00 AM