Put Up Your Dupes! CG Agro vs. Cg Cast a Spell

For today's comparison post I have for you China Glaze Agro vs. China Glaze Cast a Spell.  Now Normally I don't think to find dupes from the same company but when I swatched Cast a Spell I just had to find out how close to Agro it was. Now so far I have yet to discover any true dupes in my collection. I have had a few that are very close and would probably appear to be the same polish to someone who isn't a polishaholic. But again today I have struck out in finding a true dupe. Let's start with the bottle shots, shall we..... 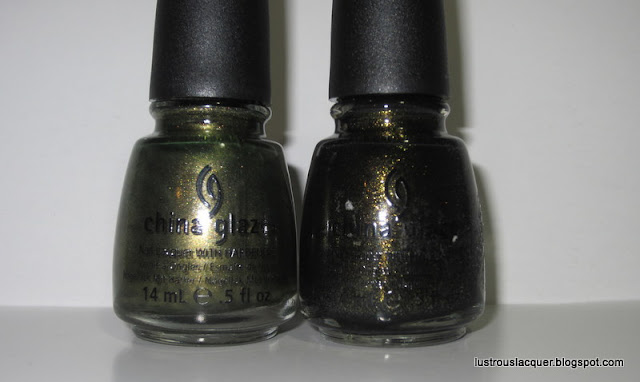 
As you can see these two are both deep green colors. Agro seems to have a golden shimmer while Cast a Spell has a definite glitter appearance to it. They both have glints of gold to them but Cast a Spell is more obvious.


Let's see how these two compare when swatched on a nail wheel. 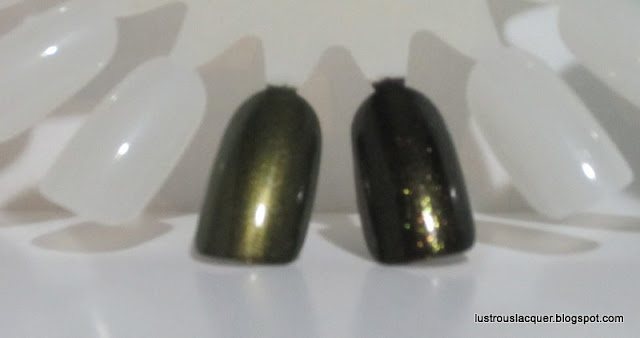 
I wish my camera would have been able to capture this better for you but every shot I took turned out blurry. This was the best one out of the 20 I took. As you can see Cast a Spell dries to a darker finish. Both polishes are smooth to the touch when dry. Agro's shimmer is more apparent when the light hit it while Cast a Spell's is obvious in any light. No dupes with these polishes.
Put Up Your Dupes
By Lustrous Lacquer at 2:00 PM

Email ThisBlogThis!Share to TwitterShare to FacebookShare to Pinterest
Labels: China Glaze, Put Up Your Dupes