Happy Monday! For those of you still here thank you for sticking with me while I recovered from my dislocated shoulder. I'm still not back to 100% but at least now I can type with both hands. Which as you can imagine makes blogging a lot easier! I decided to start the week off with 2 polishes that I picked up on clearance last summer. China Glaze Unrefined and Toe-Tally Textured.

Can I be completely honest with you here? When I originally picked these two up I had no idea they were textured polishes until I got them home. I liked the colors on the shelf, looked at the names and realized I didn't have them yet and made the purchase. Even the word textured in the name didn't register at the time. I went to photograph the bottles for a haul picture and had a duh moment. That is also part of the reason why it took me so long to actually wear these polishes. I'm kind of picky when it comes to my textured polishes. I adore the original Pixie Dusts from Zoya with their subtle shimmer and everything else seemed to fall flat for me. That being said I'm glad I gave these two polishes from China Glaze a chance.  Their fun, but I don't love them. 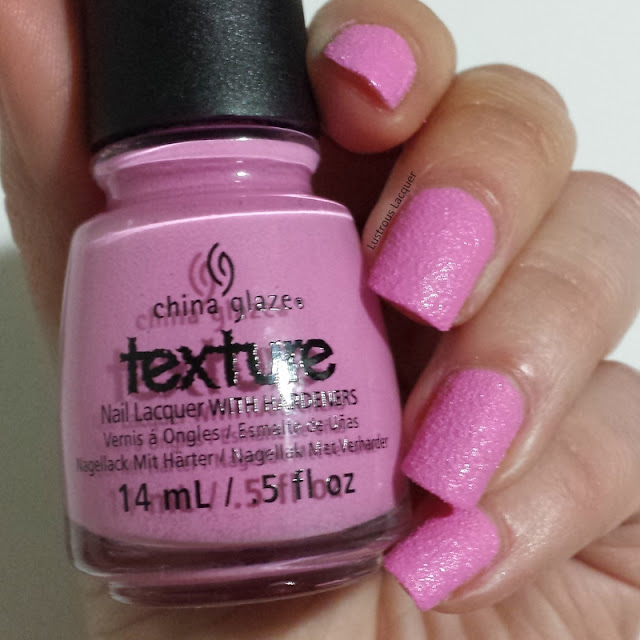 Unrefined is a bright bubblegum pink the flowed effortlessly onto the nail. A word to the wise, if your bottle has been sitting around for a while make sure to REALLY give it a good shake. I could tell after application on one nail that the "texture" had settled to the bottom of my bottle. I had no issues once I figured that out, and had great control over where the polish went on my nail. Shown here is 2 coats without top coat. 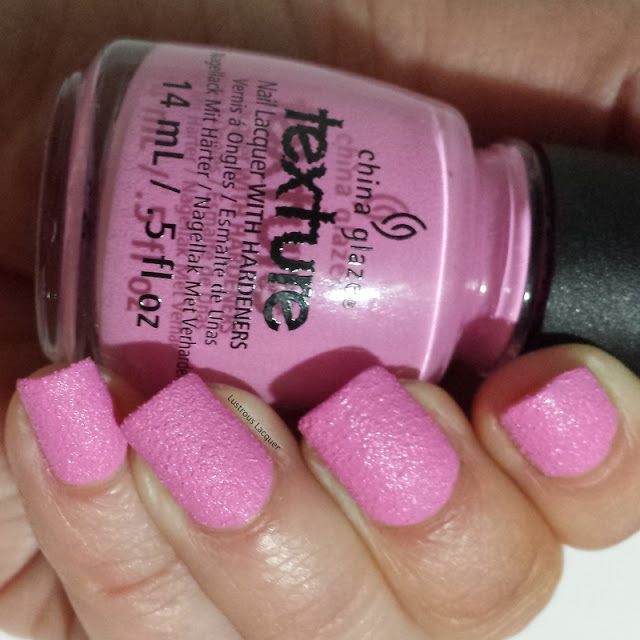 Unrefined dries to a gritty finish, slightly rougher than a Pixie Dust, but not so rough that it wanted to snag on things. The texture was evenly spaced on the nail and removal was as easy as a regular polish. 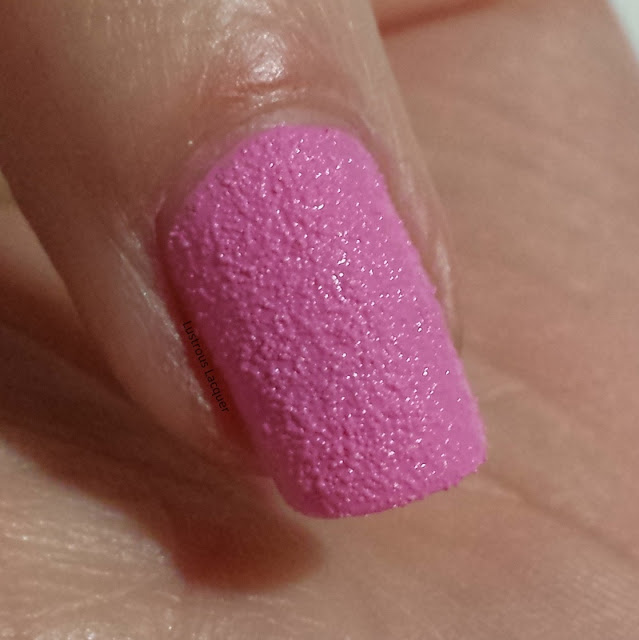 You can see the light reflecting off my nails in my photos, but that's all the sparkle you'll get from this polish. Under regular lighting, it had a dull look to it. Which is kind of too bad because I think some subtle shimmer would take this from ok to yay! 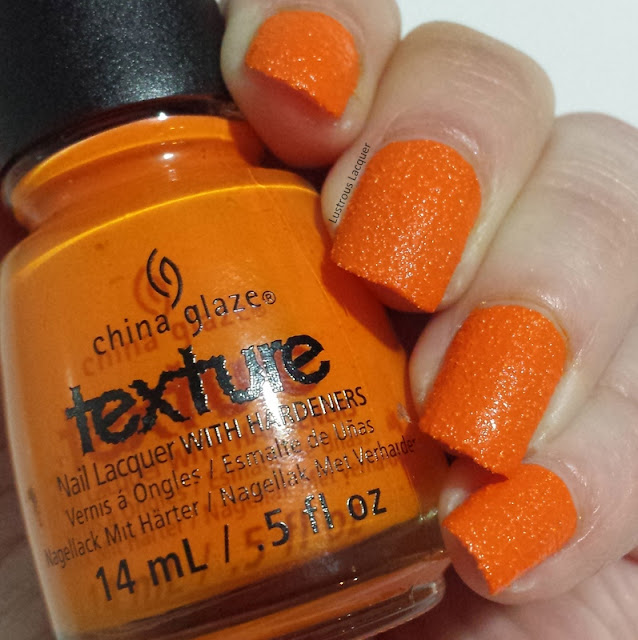 Toe-tally Textured is a bright, true orange polish with a formula that mimics unrefined. The brush in mine had a few wonky bristles that made application interesting, but I was still able to control the polish during application. 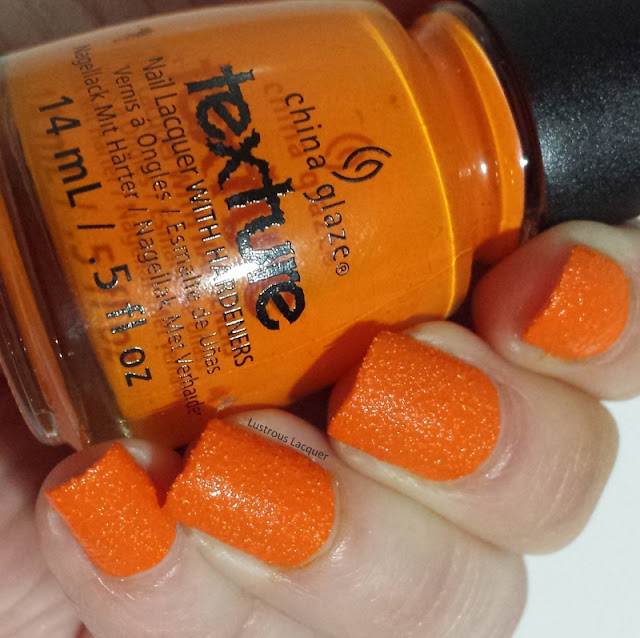 Staying true with the formula Toe-tally textured dried to a slightly gritty finish. Shown here is 2 coats without top coat. I was a little surprised that the polish dried so much darker on my nail than it looks in the bottle. Unrefined dried slightly darker but not noticeably so.  The darker color ended up turning me off slightly to this one since I feel it washes my coloring out. But it might be fun for a pedi? 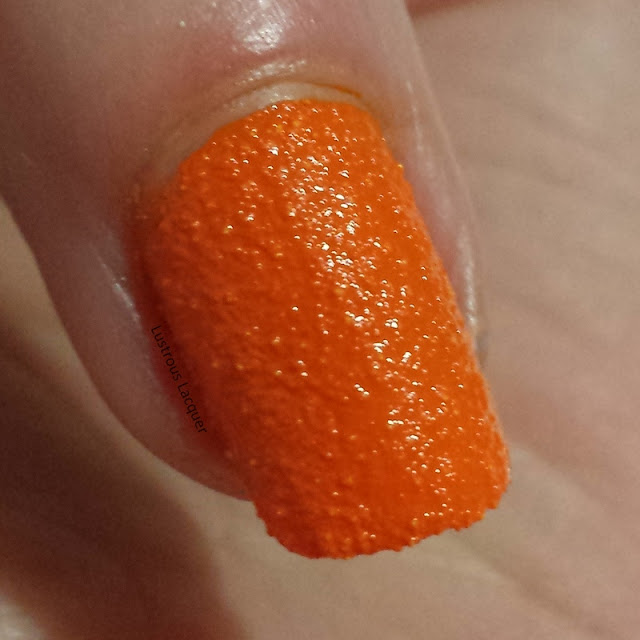 I do like that the texture spreads evenly over the nail, and removal is a piece of cake. But I probably won't be wearing this polish again. Unless I get brave and try it on my toes. lol

Overall I have decided that I should have given other textured polishes a chance over the last few years. But I may have missed the opportunity since it seems to be a dying trend. What do you think? Has the textured polish gone the way of the crackle finish or is it still popping up enough to be a contender? Thanks for stopping by and Happy Polishing!

Textured Polish
By Lustrous Lacquer at 6:00 AM