It's day 2 of the Get Lucky Nail Art Challenge and today's theme is Ireland Inspired. I have to be completely honest and tell you that I had no idea what I really wanted to do with the manicure. Even as I sat down to do it I had no plan in mind. I knew that I wanted to include the Irish Flag and the Claddagh symbol but that was it. So I got a few supplies together and just kind of let things happen. 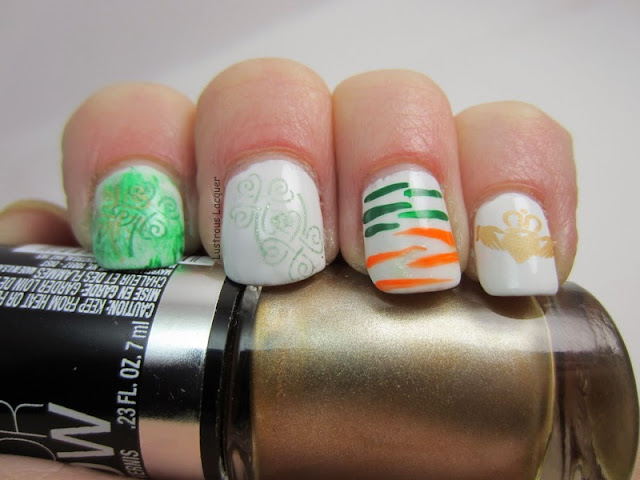 My pointer finger sort of happened by accident. I had my white base and started to freehand some clovers on it. They weren't turning out very well so I dipped my clean up brush in acetone and tried to remove the clovers without removing the white. Instead of removing the clovers it sorts of smeared the green around giving me an acid-washed look and I thought it was pretty cool. I decided to use it as a backdrop for my Celtic knotted clover image from Bundle Monster plate BM-403.

The ring finger is a nod to the Irish flag without being an exact replica. I wanted to do something a little different but still have the same feel. I freehanded the stripes using my striping polishes. I'm not thrilled with how it came out but I guess this is what happens when you have absolutely no plan in mind.

For my pinky, I decided to stamp the image of the Claddagh from Bundle Monster plate BM-418. I actually had a Claddagh ring when I was growing up and loved it. Even though I wore it the wrong way. The saying goes if you're heart is taken the tip of the heart should be pointing towards you and if you're single the tip should be facing away to invite love in.

The middle finger I had no ideas what so ever to do and ended up using the same clover image as the pointed finger placing the image head to tail to look like an intricate Celtic knot pattern.

Hopefully, for tomorrows challenge I can find a little more inspiration and have a manicure that I'm pleased with. Now let's check out what the others have come up with.


An InLinkz Link-up
Themed Manicures
By Lustrous Lacquer at 7:00 AM